The life of a writer is full of disappointment and self-doubt – often to the point where you can find yourself wondering if maybe you should be doing something else. We see our Decca go through cycles of passionate work followed by despondent days on the couch, but we didn’t really understand until it happened to us.

Success was within our paws! Last year, we were recruited to join a group of like-minded blogging pets to write for a parenting website. 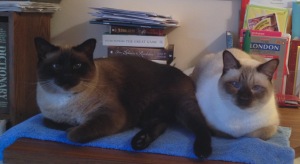 Then, despair! After a few months, we all got bumped in favor of a recipe blog. Our precious works weren’t even archived. Something about traffic – or lack of it.

What did we want traffic for? Traffic is dangerous for small furry animals. We wanted readers! Nonetheless, recipes apparently are doing much better with the traffic thing. So we went into a funk and joined Decca on the couch. Boy, has TV gotten terrible. But there we were, licking our wounds (and each other, and her) trying to figure out our next move while our egos recovered.

Here we have to give a shoutout to some bloggers we really admire. Every single day, they produce posts that are fun to read, inspiring or thought provoking, downright educational sometimes and engaging always. So here’s to Savannah and Ingrid and Caren and Cody. We salute you for your creativity and perserverance. And we understand now how hard it is to do what you do.

You bring so much good to the world, and we wouldn’t be able to start the day without you.

We may never rise to your level, but we’re still cats in a writing household, so write we must. To get us back in the groove, we’re offering up the best of our “professional” work, starting with this, since it just happened again this morning.

We discover our inner hunter

We may not have discovered our inner Siamese yet – we still speak softly, and an adult Siamese cat in full voice can bring the cobwebs down from the rafters – but last week we unleashed our inner lions.
And we were heroes in our home! Here’s what happened.

A fly got into the house from the garage. Did we go crazy? Not at all. We got strategic. It’s hard to believe, but even though we’ll be 3 years old next week, [Boy, does time fly, he-he. We’re closer to 4 now.] we’ve never seen a fly in the house before. Stinkbugs, yes. Spiders, check. Even a small moth once, and a centipede (yuck!). So we had to analyze the situation and develop a plan.

But this fly! It was huge! We know now it was a horsefly, but we don’t get it. Why is a horsefly bigger than a housefly, when a house is humongous next to a horse??

Anyway. There it was, buzzing around the kitchen. We kept a close eye on it while we split up. From that point on, we were a team, laser-focused on that fly; if you could have drawn lines in the air, we were the three points that made a triangle, the fly pinned between us by our keen blue eyes.

And then we started walking. Every time the fly landed, it barely got time to catch its breath before we moved in from other side. It didn’t know what to do, except that it had to get up and keep flying. From the kitchen, off the living room lamp, to the stair rail, back to the kitchen, into the pantry, up the powder room wall, back into the kitchen. Repeat.

By the time the fly collapsed, panting, in an exhausted heap on the floor, we were still cool as cucumbers, ready to high-five each other and retire for a well-deserved nap, not a whisker out of place — and no damage to anything in the house.

We had done our jobs. An obliging person picked it up in a tissue and got rid of it. (What? We didn’t want to touch the disgusting thing.)

What a team we were!

You didn’t know cats could collaborate like that? A lot of people think of cats as loners, but it isn’t always the case. That’s why we say we unleashed our inner lions – lions will hunt in groups, some taking on wing roles to keep prey moving and drive it toward the lion that will deliver the coup de grace.

We did a little research about feline hunting techniques for this blog and found a few other interesting facts, too. Do you know why a stalking cat swishes its tail before it pounces? Neither did we – it just feels so good to wind up like a spring before leaping.

This post published on Central Penn Parent in 2013 has been edited for length. Stop by and check out the recipes!

What can be better than felinity? We rule the web; a world-famous art museum recently drew thousands — We suspect millions — to the first-even international cat video festival. (We were resting and did not attend. Here is the winning video.); We dare you to go to YouTube and search for “cat.” There aren’t enough hours in a day!

We realize We are not the first to venture onto the Web, nor will We be the last. But to amuse our favorite in-house author, chronologer and factotum, We graciously agreed to lend our images for this endeavor. We invite you to view our photo gallery. All rights reserved!

Trouble and Mischief *
* (Pseudonyms, of course. If She can do it, so can We.)